One of those silly mistakes… As mentioned in my previous post, I’ve recently installed and configured a new Skype for Business landscape at my company. While implementing this I made one of those silly mistakes that cause you to spend hours looking for a solution… which is in fact one simple undocumented configuration setting. For our SfB configuration we use a high availability SQL cluster and we’ve also set up a Database Availability Group, or DAG. Once enabled, the first field gets relabeled ‘SQL Server Availability Group Listener FQDN’, the second ‘SQL Server FQDN’. Initially before enabling the DAG I set these values: 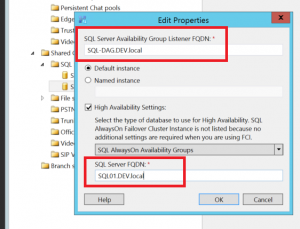 After the installation was complete and my published topology was running I ran into all sorts of problems, the root of which was the SQL datasource being read-only. Shortly after I determined the errors went away for a while when I switched the active node in the SQL cluster, so something had to be wrong with those settings… but what?!

So what’s the correct configuration? After the initial installation of SfB and finalizing the replication of all the databases for the SQL DAG, you need to change the SQL server FQDN back to the DAG FQDN. 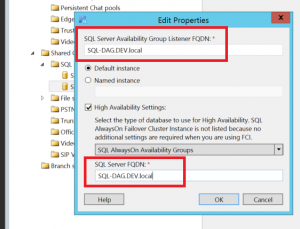 Why are there two fields for the same setting? You need to install the databases onto a single SQL node once before you can switch on the DAG settings, then remember to reconfigure the SQL store in your SfB topology with the DAG FQDN. Would be nice if the Microsoft documentation was explicit on the little things like these. One final tip, whenever you see a field that requires the FQDN, double check you actually used the FQDN before publishing your topology. Changing the FQDN on the SQL Server store after the topology has been published can be a chore…