In consultancy we see a wide range of business sectors. From healthcare, to banking, but also the education sector. Yesterday I was providing advice on user adoption and migration strategies for a large educational institute. In attempting to explain the security architecture of Office365 and SharePoint Online I used several metaphors. To summarize what I had told him, my customer offered a metaphor of his own in return which I found to be very effective. The metaphor is one based on medieval times and castle related terms.

In medieval times there was a rough division in security policies based on the layers: 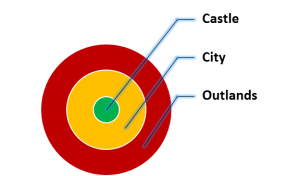 Within the castle security measures were strict and centrally managed. All comings and goings were tightly regulated. A city enjoyed the safety provided by castle walls, under the conditions of central regulations by castle administration. However, the city was primarily a civilian zone with itself a decentralized management structure. Giving some freedom to areas such as commerce. The outlying lands had no walls to protect them, yet no rules were enforced from a centralized command structure.

The castle that is SharePoint

In this case the metaphor was used to reflect a security setup for Office365 and SharePoint. In this scenario we’ve suggested creating a tightly controlled SharePoint environment, where users can mainly collaborate with each other and where functional support / key users determine if changes are needed and how to implement them. Literally, users receive access to readymade sites and libraries, but are unable to create new sites themselves, or customize content types and so on. Yammer is the platform where users are allowed to engage more freely, creating their own groups and inviting users to those groups on their own. This would be the city with walls where users get to interact and invite users through an open gate. The centralized guidelines however state the general purpose for Yammer, without strictly monitoring or enforcing its use. The outlands are herein represented by OneDrive for Business, mysite / personal storage specifically. Where users are allowed to bring in any content, structure it with folders to their own ideas and invite whomever them want for shared content. By no way is OneDrive a clear representation for the outlands since OneDrive is still built on ‘land of the king’, errrr… Office 365. But for the purposes of the design this customer is going for, it fits. True outlands would in fact be user laptops, fileshares, or in older environments SharePoint 2010 Workspaces.

The metaphor is a tool to help you illustrate complicated IT concepts, by using a common reference. Although it isn’t an exact match for a complicated structure such as Office 365, I bet administrators in medieval times would say the same about running a city state. Use at your own behest!